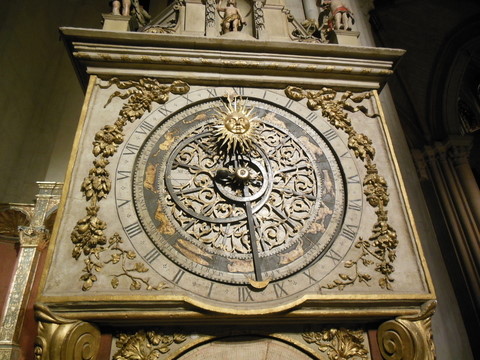 This is the second part of a two-part article on how time was perceived and measured in ancient and medieval Europe.

In the last installment of History for Fantasy Writers I addressed years, months, weeks, and days. Now I turn to shorter lengths: days, hours and still shorter periods. I’ll close with a more general consideration of time and the awareness of time.

We carve the day into twenty-four hours, but in the past the hour was a malleable thing. There were twelve hours of daylight and twelve hours of night, regardless of the season. The day began with zero at sunrise. Then came the first hour, the second, and so on. The twelfth hour fell at sunset. A winter daylight hour was therefore shorter than a summer hour.

This feels a little nuts at first, but it’s actually pretty sensible. At least the word midnight makes sense in that system—it’s the mid-point of the night, regardless of how long is the night. All we have to do is abandon the notion that an hour is a unit of time, to consider it as marking portions of a day. The first part, second, third, and so on.

The malleability of the hour could cause difficulties, sometimes. The historian Marc Bloch tells the story of two men who agreed to have a duel at a certain time on a certain morning. One fellow showed up “on time” and waited around. The other fellow didn’t show, so he left and declared victory by forfeit. The other fellow then showed up, looked around, and also declared victory. They had to go to the local monastery to get an authoritative answer as to the time of day!

This perception of hours creates an issue for writers of traditional fantasy. If we say that Bigtown is four hours away from Smalltown, we’re using a modern unit of time in a pre-modern setting. Four hours of walking is a different distance in winter than in summer.

Hours in Other Cultures

In India, the hours of the day were numbered but were also named, rather like months of the years.

Chinese units of time were always in fractions of the day, all the way down to one that was 1/6000 of a day. A very old and widespread system divided a day cycle (24 hours) into 100 units. Divisions of night hours were often less precise than the daytime divisions. The Chinese used five “watches” to mark the passage of the night, which of course varied in length depending on the season.

In some African cultures, they would tell each other a meeting time by pointing at the sky where the sun would be.

The Hindus divided the day into sixty segments.

Scandinavia daymarks: divide the horizon into eight sections—north, northwest, west, etc. The time when the sun was directly over the daymark was one-eighth of the day.

There’s Italian time. A bell rings at the end of dusk, which traditionally is a half hour after sunset. The precise moment wasn’t important—the bell rang when it rang.

From there, the hours were numbered one to twenty-four. You can see an example of this on the clock face of the tower in St Mark’s Square in Venice.

It’s worth giving some thought to how “an hour” might be used. In a city, church bells could be heard most everywhere. These rang at regular intervals, primarily to tell monks and clerics when to perform certain rites (vespers, nones, etc.). Citizens could and did use these to say when to meet, when to knock off work, and so on.

A village might have a bell within earshot, but many did not. In the countryside, the main units were sunrise, midday, sunset, mid-night. There was hardly any need for greater precision.

The other use for time was as a guide to distance. Paris might be four days from where I live, a measurement that might mean I reached the city in the first hour of the fourth day or in the last hour. Or even plus or minus a day, given road conditions and accident. There again, measuring down to the hour wasn’t really necessary. The same goes for sea travel, where progress was marked largely by the passage of landmarks. Time did not become important until we started crossing open ocean. Once navigation needed longitude as well as latitude, precision in time became vitally important and was one of the main drivers of innovation in timepieces in the 18th century.

The word minute, along with the word second, comes from the Romans, but the duration of a minute and a second has fluctuated over the centuries.

It’s worth thinking about why people made clocks. What were they trying to mark? For some it was the passage of the day because certain things were supposed to happen at certain times. Mostly this was for prayer. Significantly, work was not measured by hours but by days. A hired hand got paid by the month or week or even by the day, but not by the hour. That didn’t happen until very late in the Middle Ages.

Once mechanical clocks came along, they were marvels in themselves. Clockmakers and their customers became sort of infatuated with the device itself. They became fabulous in ornamentation, in size, and in complexity. Very quickly—over the course of the 14th century—every city felt the need to have at least one large town clock, typically built into the city hall building. Interestingly, even though monks were leaders in keeping track of hours, one rarely finds a mechanical clock on monasteries.

What marked time prior to the mechanical clock? Lots of devices: water clocks, candle clocks, and hourglasses all marked the passage of time, though rarely to measures of less than a quarter hour. Few people needed this level of precision, so normally it was only the wealthy or privileged who had them, which means they were also beautifully made.

Sundials were common and ancient. These were cheaper to make, but did require a certain basic astronomical knowledge to construct and set up.

We rarely find the word “minute” in ancient or medieval texts. That includes plays and poems (there was nothing like a novel or short story in these centuries)–no cases of a character saying “hold on a minute” or “just a second.”

I don’t know about you, but I stumble over this and I have to deal with it often. A character does or says something, and two seconds later there’s a reaction. But did people really mark time in seconds? How could they even measure such a thing, before there were clocks? And isn’t “second” an odd sort of word to use?

Latin to the rescue. The word comes from secundus which means following. You notice how in English we have the word two, but the ordinal form is “second.” No relation to “two” at all. Secundus means “following” in Latin (it’s also why people “second” a nomination).

This was revolutionary. Before this, days and hours were flexible concepts, as you can see from the information above. Nothing had to be precise because nothing could be precise, in the sense of being down to the minute or second.

Mechanical clocks, though, are not flexible. An hour is always the same length, or at least it is until the clock starts to wind down (which meant people were forever checking on the “correct” time so they could re-set their clock after they wound it up again). But so long as the clock was running, the hour was constant.

We see a long period, going right up into the early 20th century, when there was a sort of class prejudice about time. The “better sort” were punctual, not least because they lived in cities that had clocks on public display everywhere, and because they themselves could afford their own watch. They always knew the time. The poor and the rural folk, though, were notoriously not punctual, which fed readily into stereotypes about laziness. They came from a world without mechanical clocks, a world in which there was morning and afternoon, but in which something like “a quarter to ten” was rather meaningless. You couldn’t be ten minutes late for work out on the farm. But you sure could at the factory!

How have you represented time in your own writing? Do you use invented systems or organic systems?

And leaving aside naming conventions, have you used time as a cultural factor? Do elves perceive time differently than do dwarves, for example? Let us know!

To answer your questions, my Wade of Aquitaine series is consistent with what you have written here. It takes place across the centuries, but much of it is the ninth century. The topic of time comes up once in a while, and there is a divide between rich and poor, with the wealthy being quite snobbish about more precise time measurement and the poor being quite flexible. Instead of having people say, “Wait a second,” I have them say, “Wait a moment” because this is an undefined short period of time. If they are educated Romans or Byzantines, they refer to a tenth of a day as their shortest unit and they will defer to any system of bells as a matter of common agreement.

Greater time: 12 months of 28 days each plus 4 special days corresponding to the Solstices and Equinoxes. Days and months are numbered, not named. Reflects a slightly tighter orbit for the planet.

Lesser time: old style, hours that varied with the length of daylight. New style, 24 hour day, each hour divided into sixty minutes. Big, ornate clocks, usually on churches or civic buildings are fairly common, the more elaborate ones marking the hours with drums, bells, and mechanical trumpets, often played by mannequins. One such, a bit unusual, plays a minor role in 'Empire: Metropolis.'

This is fantastic. I am a theologian, not a historian, but I am trying to do a similar job of deconstruction. Finding ways to talk about time in a different universe has been really difficult, but I now feel that I have a point of reference. Thank you.