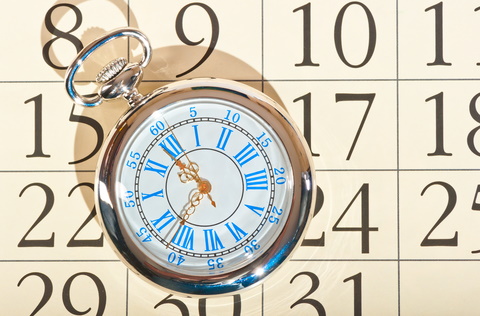 This is a two-part article on how time was perceived and measured in ancient and medieval Europe, in the age before mechanical clocks. In Part One I’ll talk about the larger units of time: days, months, years, and the like. In Part Two, it will be hours, minutes, and seconds.

It is common for fantasy writers to make up their own calendars. Some merely rename the months and days of the week, while others derive a calendar from the specific astronomical and geophysical aspects of their world.  I’m not here to talk you into or out of any of that. The purpose of this article is to give an overview of the wide variety with historical precedent, and to suggest some aspects that may go overlooked.

I’ve mentioned the calendar. In addition to days, weeks, months and years, don’t forget the seasons. Each of these categories can provide rich ground for invention. Don’t forget the shorter periods, though: hours, minutes, seconds, or specific measurements such as a ship’s bells. To anticipate a central point: the exact measurement of time is a modern obsession. Before the ubiquity of mechanical clocks, people had very, er, flexible notions about time. OK, let’s start with years.

Right away we are presented with numbers. Whether it is the Gregorian calendar or the Islamic, Judaic, Hindu, cultures have long measured the years as an unending (we hope!) procession marked by numbers. The year may turn with the spring equinox or the winter solstice or some other date, but the succession of years is numerical.

This wasn’t always the case. In ancient Athens and Rome, years were named. Athens was ruled (in part) by three archons, one of which was the “eponymous archon” so called because his name was used to name the year in which he served. You can see a list of them here.

The Roman Republic employed something similar. That city was ruled (in part) by two consuls, and the year they served was named after them. You can read a bit more about this here (the article contains a link to a full list of Roman consuls). For example, the year 207 BC was the year of Gallus and Verranius. A famous Roman joke ran that when Julius Caesar held the consulate alone, the year was called the consulate of Julius and Caesar. Those crazy Romans.

This practice continued in an altered form long into the Middle ages, most commonly by marking the year of the ruler: a peasant might live in the fifth year of the reign of King Louis. He got married in the last year of the previous Louis, the fat one. If more precision is needed, the peasant might also note the year of Count William or Bishop Ambrose.  Medieval historians encounter dates like this often. This method of marking the year makes good sense for most common folk, for it references what was meaningful in his life. The larger calendar, hearkening back to the creation of the world, or to a religious founder, was meaningful mainly to the priests. All through the Middle Ages, both were used.

And there was a third. This is peculiar to Christian Europe, but I’ll mention it in case is sparks an idea. It’s the Indiction. This comes from the Roman fiscal system—really, a calendar tied to taxes!

The length of one Indiction was fixed by law at fifteen years, beginning on the first of September. Certain influential writers came along and picked a different beginning, which makes medieval chronology even more fun, but for our purposes we’ll ignore that. The striking thing is that the influence of the Empire was such that this method of counting years persisted far into the Middle Ages.

A final note about the Roman calendar. By the time of the Empire another system was in at least partial use: years counted from the founding of the city of Rome. That had been worked out to be 753 BC. The Latin phrase was ab urbe condite (from the founding of the city), abbreviated AUC. Counting years from a significant foundation would be another way to mark your chronology.

So, short form: you can number the years or you can use names. If numbers, look for some major event that everyone in your world would recognize as a turning point. You may not even use this in the actual story, but it will be invaluable in your world building.

The new year began at different times in different places, and even from one author to another. This makes dating events in the ancient or medieval world additionally confusing. I don’t recommend you incorporate this into your story, though. Confusing the reader is rarely a good goal!

The next-shortest marker would be the seasons. Spring, summer, fall, winter. That should be easy, right? Here again, though, modern precision is at odds with pre-modern practice. Our seasons are tied to astronomy, but it was far more common to tie seasons to agriculture. In very dry places, there are but two seasons: the rainy season, and the other. The natives of the American Northwest have two seasons but they are marked differently: there is the season of religious festivals, and the secular season when worldly work is done.

The winter solstice is recognized almost universally in the northern hemisphere. The moment when the sun reaches its lowest ebb and begins to return to the world is of profound importance. Spring and autumn, on the other hand, appear in human languages much later.

The other big seasonal markers are planting and harvest. These will vary widely from one place to another. If you think of how much lore goes into getting a successful crop, you can readily see why people might be reluctant to move very far. How would you know what to plant when? Moreover, pretty much everything in the animal world is also conditioned by season—another thing to keep in mind for your world.

This one frequently gets attention from world builders. It is tempting, and comparatively easy, to choose new names for the months. We are tempted to this because the names are so recognizably here and now rather than once-upon-a-time. The division of time into months is obvious, and the clue lies in the name itself: monat, moon … month. If your world has a moon, then having months is almost a necessity. You’d have to explain their absence. If your world has more than one moon, well, good luck!

There’s more than one way to count the days of the month, though. The Romans originally made all their months (save February) the same length, and that’s certainly one possibility. Within each month were three named days: kalends, ides, nones, meaning the new, middle, and full moon. If you wanted to refer to another day, it was in reference to these—so, I last went to the movies four days after kalends December (it reads better in Latin).

The seven-day week is widespread and ancient. Naturally, the Romans had to be different. Their week was the nundinum and was eight days long. The week in ancient China was ten days long. There’s pretty good evidence that the length of the week in some other cultures was tied to the length of time from one market day to the next. It was important that everyone knew when market day was, so you knew when to bring your goods to sell.

Seven days is very widespread and the reason is astronomical: there are seven “planets” visible to the naked eye: Mercury, Venus, Mars, Jupiter, Saturn, the sun, and the moon. The names for the days of the week derive from these in places as far apart as Germany and India. So if a world builder has constructed a new astronomy, naming days after planets is a natural.

Ok, this at least ought to be easy, right? A day and a night make one, er, day. We really need to work on our terms!

The variation comes when we ask at what time a day begins. This was important primarily to priests (of several religions), whose daily rituals were conditioned by the question. In some cultures, the day begins at sunrise, while in others it begins at sunset. There are even cases where it’s “the hour of dusk” or some such descriptor. Another case where the pre-modern mind was not obsessed with precision.

I don’t know of any instances where a day is longer or shorter than the day-night cycle. It’s tied to the sun, which is pretty hard to ignore. If your world has multiple suns, you might get inventive with this.

That is enough for this installment. A second one will consider shorter units of time. Meanwhile, what can we make of what we have so far?

New calendars, for sure, but fantasy writers hardly need that suggestion. I would draw your attention more to the average Joe—the peasant, the shoemaker, the merchant. What would be important to them?

Most frequently and perhaps most importantly, market day. So, days of the week will matter. Close behind would be the seasons. We need to have the project done before harvest. Or, my daddy got sick last winter-tide. The name of a month or a specific day within a month would come up far less often. In any case, most references to time will be within a year rather than across years.

If other references are needed, probably that regnal year system will be most appropriate. That has the advantage of giving the author of not being tied to an absolute timeline. The fifth year of the reign of Good King Richard, when the orcs invaded, could be in 722 or 1451. You’ve got room to fudge.

I’m constantly surprised and delighted by the inventiveness of authors in this area. How have you marked the time? What calendars do you have? And, most especially, to what use have you put them in a story, as distinct from world-building?

Let us hear from you.