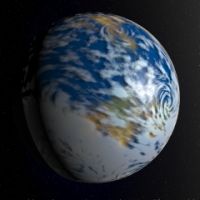 Every time I ask other fantasy writers a question about the worlds I create, one of them will inevitably respond, “What does this matter to your story?”

That’s because many new writers, influenced by roleplaying games and the illustrations featured in our favorite fantasy novels, are prone to view worldbuilding as filling in the gaps on a map, cataloging the monsters, or finding new ways to justify fireballs. But these details alone do not create immersion.

To make the jump from swamping readers in boring detail to immersing them in my writing, I have to use the world to help deliver the emotion of my story. My map is a world out of context. An entry from my bestiary may give characters a challenge, but not their foil. And whether the sorceress gains her medallion of fireballs from the ruins of a ransacked realm, the death wish of a dying demon, or from the Musty Mage Shopping Mall makes only as little or as much difference to my reader as it does to my story.

Even in a mundane novel set in a downtown deli, every character comes with a relationship to the setting. Whether the villain puts diseased sewing needles in a club sandwich or hurls lightning from his rod, the setting will fuel the plot. And whether people will put down a book dreaming of a mystical journey or terrified of going out to eat, the setting can make an impact on my readers. But the world won’t do so in isolation.

I need to design my setting as a tool for developing my characters and my plot.

To do that, I need to create a world around the needs of my story, while still giving me the coherency and flexibility I need to keep my readers immersed. And I need to do so without wasting time.

By creating a new world, we create new kinds of people and new journeys through the human experience. Not only will characters have a relationship to the world, but it’s one that will have helped to shape their personalities and will continue to help develop their character arcs throughout the story.

If I want to tell a story about a lone warrior who rises up and saves his people, then his foil might be a world that suppresses or corrupts all other warriors. If I want an ambitious sorceress who seeks to rise quickly in the league of superwizards, then I may want a world which gives her an advantage the others do not have. If I want a story where the death of tribal warrior Balu-Balu at a tournament results in the destruction of his people, then I want to share with my readers a cursed world, where the nations whose champions lose in duels will lose the same way in war.

In many ways, a fantasy world is like an unfilled vacuum pulling at your plot. The larger and more complex your world, the more your plotlines will escalate to fill it.

If you have demons crawling out of a bottomless pit, someone will explore the bottom. If the gods are real, eventually someone will meet one. If there’s twenty-one nations on the continent, readers will meet characters from all of them. If your magic system depends on the mystic web beneath the fabric of the universe, then eventually your villain will find a way to snip the threads to exploit the system.

As authors, we need to seed our settings with the tools we expect our characters to use. By including something in our world, we’re committing our characters to exploring them. So take a moment to think through your worldbuilding decisions, and to consider what your characters will do with the elements you’re including.

Keep it Coherent and Flexible

Fantasy worlds are complex beasts, filled with exotic nations, powerful magics, and bizarre creatures. Keeping track of your setting’s details for many authors means reams of scrawling, disorganized notes, making it difficult to visualize the gaps or the story opportunities which arise from your setting. Worse, many authors commit large amounts of time early in the process to developing details that prove irrelevant to the story.

Worldbuilding lists sometimes cover dozens of topics, but I try to keep my process simple while still covering the bases. I’ve found that those lists can be captured in five broad elements of worldbuilding, each of which could be covered briefly or in depth depending on the needs of the story.

Once I have a basic framework for my story, I sketch out a spider graph for each of these topics, using short words and broad placeholders to brainstorm ideas, providing details only as needed. Considering each of these five elements, and expanding on them only as your story develops, will help you to create a world that’s coherent, without forcing you to get bogged down in details you may not need.

Not only do settings set up your characters and provide resources for your plot, but settings develop, much like characters. They have a backstory, they have secrets, they have big reveals and subtle changes. The relationship between your characters and your setting can have an arc. With a bit of creative foresight, you can use these elements to show your readers something truly new.

Worldbuilding is one of fantasy’s greatest strengths. Use it.

How do you use your settings to support a character’s unique story?

TedFauster   Truer words have never been spoken: “There’s a place for Sheldon Cooper. Don’t put him in your book.”

I love this article. Too many times writers who are also gamers just ignore story structure. It’s called a *data dump*, and no editor ever wants to see that, especially early on in the story. Of course, its helpful to have this information. It helps the writer do a much better job of fleshing out the story and breathing life into characters, but there is a place for this information, and it is not in the book.

I’m a gamer, too. And I love me some back story development. That’s why I placed a world map on my website with clickable links so readers who are interested can dig a little deeper.

I tried to explain it someone like this: Have you ever had a conversation with someone, and instead of saying…

“You can only find those at the farmer’s market.”

“Kiwis are a product of Australia, which itself often refers to its residents *kiwis*. Most people don’t know this, but its perfectly acceptable to eat the entire fruit, skin and all. The skin is actually quite tart, a tasty companion to the sweetness of the inner fruit. Of course, kiwis are seasonal, and sometimes difficult to locate. Instead of wasting a lot of time driving from grocery store to grocery store, which often have long lines, I would suggest visiting your local farmer’s market. I saw on facebook that they will be having a sale this weekend!”

There’s a place for Sheldon Cooper. Don’t put him in your book.

A lot of the authors I enjoy have actually taken the time to really get to know the history behind the place and people that they planned to write their story about, even if they used fictional characters. I find it makes the story more believable.

Though not exactly a fantasy writer (or is he?), I’ve always felt Stephen King was a master at setting development, often visiting the distant history of a setting and making it very relevant to current events and characters.

@Stephanie – I agree. Many writers do that, but King takes it to a different level. I also like how he makes little references to his other works in any given story.

I read a lot of amateur fantasy fiction where the setting and the characters are separated. You get – pretty paragraph of gazing out over the woods – then  – active paragraph of characters interacting – and so on. They need to live in the woods, get jabbed in the back by a branch, swat mosquitoes. Great article here. Great reminder.

Glad you included ecology in there. Other than a wayward dragon or the odd man-eating tree, you don’t see much in the way of flora and fauna as it relates to the actual plot of fantasy novels. There’s a lot of backdrop and not much interaction from what I’ve seen. All these things force the civilization to unfold in a particular way too. It has to fit.

I think a lot of fantasy writers err on the side of atmosphere. Their worlds provide backdrops for the lives their characters are leading, but I don’t agree with that method. It’s disconnected somehow. Instead, what you spoke of. The characters – people – are intricately connected with where they come from and where they live. It affects them, or should.

Setting influences everything character motivation to the breakfast menu. I don’t fully know who my characters are until I know who they are in the context of the environment in which they live–history, philosophy, economy, etc. I’m about to revise a novel for which the setting will be one of my most important areas of revision. The more I develop it, within context of the plot, the richer the story becomes. Exciting!

For me, I use my settings first and foremost to create a sense of atmosphere and magic.

Excellent! Thank you for this. I’m about to start revising a big fantasy novel in which the setting will be one of my main improvement foci … Great pointers to inform my work. Much appreciated. Can’t wait to read your short stories, by the way.

A great article that encourages an author to think about what is possible in their created world.  The challenge of “and then what happened?” is a little easier to meet when you start poking around the flora, fauna, and features of a world.

Thanks, this really goes along with the previous article.  Good stuff here to help a writer plan and work out details!