Ask me about swords.

Malik said:
I got a warsword for Christmas. Meet "Mister Snappy." 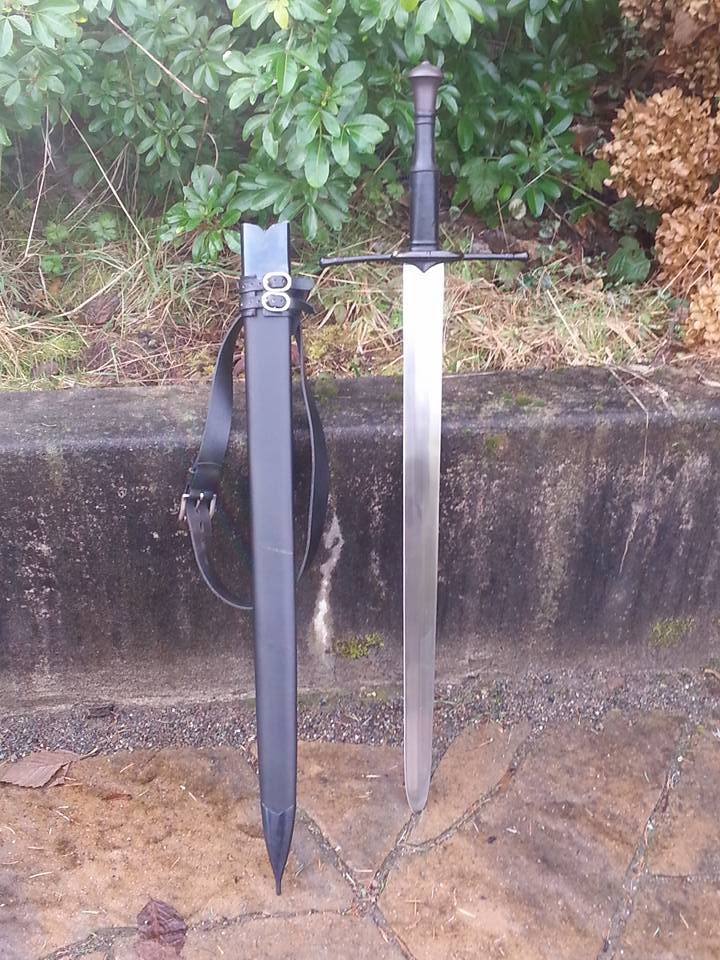 Yes, one quillon is bent. It gives it street cred.

Enough bragging, we want videos of you working the pell and doing the posta or guards!!!

Have fun with it.

We had talked several pages, and likely a couple of years, ago about differentially hardening steel in pre-industrial settings, and about clay-forging katanas.

This gif is what happens when you have a severe differential between your spine and blade hardness: you get a sword that slices beautifully but sucks as an impact weapon. You can see by the resulting dings in the blades that the edges are roughly equivalent in hardness between the two swords.

This is not a dig at the katana crowd, but it shows the stanchioning effect of a fuller and the advantage of having bilateral hardened edges on a spring-tempered spine instead of just one hard edge and a thicker, softer spine.

What happens to the katana is also exactly what would happen to a medieval / European-style sword that has a section of low-carbon slag or pig iron in the spine, something that you wouldn't know until it was far too late and you bent it into a pretzel over someone's shield rim or helmet. I'm still surprised it doesn't happen in more fantasy books that are set in worlds without blast furnaces.

I have to say, this thread is fascinating I probably should be working right now, but can't pull myself away.

I'm not sure if this is the appropriate thread as most comments so far relate to real-world examples and materials, but I was wondering how difficult it would be to create believable weapons out of alternative materials... Such as ice (hardened ice that never melts), fictional variations of volcanic glass, special hardwoods etc. Has anyone tried this in their own world building? Can I pretty much apply real-world principles with a bit of a twist?

C. A. Stanley said:
I have to say, this thread is fascinating I probably should be working right now, but can't pull myself away.

I'm not sure if this is the appropriate thread as most comments so far relate to real-world examples and materials, but I was wondering how difficult it would be to create believable weapons out of alternative materials... Such as ice (hardened ice that never melts), fictional variations of volcanic glass, special hardwoods etc. Has anyone tried this in their own world building? Can I pretty much apply real-world principles with a bit of a twist?
Click to expand...

There was a post in this thread about glass / diamond sword blades. The short of it is that you'd have to make it out of unobtanium or annealed pixie dust or something. Or, alternately, throw physics out the window.

Swords are swords because steel is steel. If you have a material that's not steel, you're generally better off making a weapon out of it that's not a sword.

I would not wont to be to one using a copper sword. Too soft

Vaporo said:
I've got some: Exactly how well do copper and bronze swords and armor hold up when pitted against steel? What differences should a copper or bronze sword have from a steel sword to maximize its potential? In general, how would one go about using a copper or bronze sword differently from a steel sword? What about copper and bronze used in other weapons? Would bronze or copper be better used in some other kind of weapon?
Click to expand...

From my limited knowledge, I'd first point out that bronze and copper are not equivalent. If I recall correctly, bronze was a better material for edged weapons than iron (steel was, of course, superior to both; and copper only better than stone).

As for bronze's performance against steel, I'll leave the details to the experts, but I'd suspect the bronze would break or bend at some point long before the steel does.

Also, it's worth mentioning that if we're talking period-accurate bronze weapons, there would be missing sword technology like the fuller, which I believe only really emerged after steel (I think?). A fuller not only reduces weight, but also strengthens the structure.

Yes, I know bronze is superior to copper. I'm not lumping them together, I'm asking their individual performance. I'm not too worried about period accuracy. The premise that I'm pursuing is that my main character's region is extremely iron-poor, so they've had to make do with copper and occasionally bronze while other parts of the world have no such limitations. They've gotten just about as far as they can with weapons technology without having access to iron, so they would know about things like fullers.
Last edited: May 15, 2017

The short answer is that a steel sword is vastly superior. We're talking UFOs vs. cavemen superior.

Armor didn't stop weapons. Armor redirected weapons by glancing them off of a hard, curved surface, which is why steel was so important, because steel is super-hard. Steel bites into iron the way a diamond bites glass, which is what made steel ideal for weapon edges, and why we still use it for weapons and tools two thousand years later. Steel gets purchase.

When you drive a steel-edged weapon into a copper piece of armor, it will dig in much deeper and transfer much more force than a copper weapon (the same hardness as the armor) would. The steel sword may not cut through the armor, but it doesn't have to; much more of the impact will transfer, and bronze and copper are comparatively ductile, so the armor will quickly break down. Rivets will pop, plates will bend and no longer articulate properly, mail will deform and even break. And the body under the armor will take a hell of a beating, since the steel weapons aren't being deflected as efficiently and more of the momentum is being transferred to the wearer.

Bronze lamellar or a coat of plates -- leather with bronze or copper plates sewn beneath -- would slow a steel sword down and might save your life, but it would be sacrificial in the long run. Copper or bronze mail, if it was riveted and augmented with cuir bouilli, might be feasible. You'd be screwed for a helmet, though.

It's also going to depend on the swords; their weight and their edge geometry. A slashing blade like a katana isn't going to be as much of a threat against disparate armors as a big, hand-and-a-half or two-handed greatsword with an appleseed bevel. Those suckers were built specifically to wreck iron and mild steel armor to the point where the opponent could no longer fight effectively. If you hit a copper helmet with a four-pound, hardened-steel warsword, you'd likely collapse the helmet so severely that you'd shatter the skull beneath.

You're not going to cut through copper or bronze armor with a steel warsword like it's a lightsaber, but the guy with the steel has every advantage going. It would really suck to face a guy with a steel sword while wearing copper armor. That's a bad day. If you wore enough armor you could survive, assuming he never got a clean shot at your head.

Also, if the guy with the steel sword had iron armor -- which he would; because if he has steel then he sure as hell has iron -- anyone with bronze or copper weapons might as well be using cardboard. He's beatable, but not with your weapons. You'd need to neutralize the steel sword -- tie it up, say, in an enveloping maneuver -- and then grapple: throws, joint locks, maybe break his knee with a diving roll and then monkey-stomp him.
Last edited: May 15, 2017

I wrote a piece on greatswords and their uses here on MS, and there's a post about the physics of armor on my blog. Good luck.

One important thing to note. Bronze swords were finishers and were always, always used with a shield. The shield is your main weapon and the one that's gonna get pummeled by the steel sword. The sword is just to deal damage whenever you can.
C

How many swords do you have in your sword collection? And what types are they?

I used this in my worldbuilding talk last night and it got a great response.

We talked Abrazare and armored wrestling in another thread, and we've touched a few times on applications of Judo and basic wrestling in swordplay, but I'm adding these here to put it in context.

Malik said:
I used this in my worldbuilding talk last night and it got a great response.

We talked Abrazare and armored wrestling in another thread, and we've touched a few times on applications of Judo and basic wrestling in swordplay, but I'm adding these here to put it in context.
Click to expand...

Good work. I did a seminar a few years back with a Chinese sword expert at a Spec Fic con on exactly the same topic. The simple conclusion was the human body only moves efficiently in so many ways and people in both hemispheres were plenty smart enough to figure it out.

I so however have my doubts about Van Tag and Poste di Falcone as being effective or not.

Russ said:
I so however have my doubts about Van Tag and Poste di Falcone as being effective or not.
Click to expand...

Clearly Vom Tag allows easy access to the pommel so it can be unscrewed and used to end your opponent rightly. This would make it the most superior of all guards, as Kingdom of Heaven taught us.

Vom Tag is how you say "Come at me, bro," in Longsword.

How heavy would a shortsword be? I have one character who isn't exactly weak, but I wouldn't consider them muscular, either, and I want them to have a weapon they can wield reasonably well and comfortably other than a knife, dagger, or bow. Also, would there be any practical reasons or advantages for wielding a short-bladed sword in reverse-grip?

A quick internet search shows a roman gladius weighed 1.5-2 lbs. While I would not be an advocate for a reverse grip fighting stance, I suppose in some situations it might have an advantage. I would think this would have to go along with an entire package of a well practiced fighting form, otherwise, I think it would somewhat quickly prove the lesser to forward facing blades. (in other words, its hard to think of any...)
You must log in or register to reply here.

T
Ask me about money.

Ask me about linguistics, conlangs, and the social use of language

Ask me about the 19th Century
2

Ask me about: Sniffer dogs